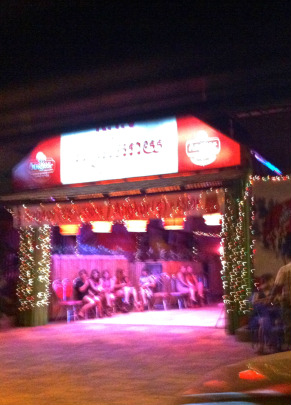 A Story from Carrie Jussely

You know, I think I had convinced myself that a moment like the one that happened tonight would never happen to me. In my time thus far in Cambodia, most of the stories I hear in the world of anti-trafficking are the redemptive ones - the stories of the women with whom I work at Daughters of Cambodia. They are stories of women who are now out of the sex trade and living new lives. I have been to meetings and done LOADS research over the past few months. All recent reports have shown very encouraging results that Cambodia’s commercial sex-trade industry has gotten less horrific, especially in its making tremendous strides in the protection and prevention of the selling of children for sex.

But with all the improvement and the great strides that have been made, it is still here. And tonight, I was reminded of this very sad, and very true brokenness before my very eyes.

Let me back up.

I have a tuktuk driver friend, Mr. Sokah, who often drives me around town to places on days I am going far away from home or at night time (for safety purposes). He is a lovely, kind, and very reliable man. But tonight, Mr. Sokah was over an hour late picking me up. We had discussed the time and the street number earlier today - “meet at 4:45 at street 240.” I thought we were clear on the plan.

But 4:45 came. 5:00 came. I waited. And I waited. And I sweated a lot. And I waited some more. Finally, knowing this was unlike him, I started to think he must have either forgotten me, or he was on the wrong street (This is actually not as common a problem as you would think for a relationship between two people who only know a small amount of one another’s language). All of this this was complicated by the fact that during a very self-competitive game of Candy Crush to pass the time, my phone completely died. I found a very kind restaurant owner who allowed me plug in (i actually HAD a plug with me…rare). As soon as I had enough battery, I called Mr. Sokah. Turns out he was just as frustrated with me because he was also profusely sweating and waiting for ME on a completely different street (street 214…which sounds a LOT like 240). Finally, with the problem cleared up, Mr. Sokah picked me up an hour and half later than we had planned. I was not in a great mood.

There have been more political protest lately here in the city (please keep praying for that, by the way) so there has been really terrible traffic in the area where we were and lots of road closures that complicate getting around lately. Mr. Sokah began our journey home by taking a few back roads to avoid lights and traffic as best he could.

We were stopped at a red light on a street I wasn’t familiar with when, something caught my eye. It was a little girl in bright blue pajamas. She was about 8 years old, barefoot, and she had a long pony tail. The girl was holding her father’s hand as they walked out of the gate of their home and down the driveway toward the street. With his other hand, the father was on his cell phone. They neared the end of the driveway, about 9 feet from me, just as another younger man pulled up on his moto, also on his cell phone. They hung up when they saw one another (clearly the father had been giving directions to the man on the moto on how to find them).

The little girl stood behind her dad as soon as the man drove up. It reminded me of the times when I was young that I would shyly (believe it or not) stand behind my dad when meeting strangers or new people. The two men spoke back and forth a little. Then the man on the moto pulled out his wallet and handed the father some money. The father pocketed the money, picked up his little girl, and placed her on the back of the moto.

The moment was surreal for me. It took a second to realize what was happening. I finally was able to get out the Khmer words “no, please, no. don’t do this, no…..” as loud as I could speak over the revving engines beside us at the light. The little girl looked over at me, and then at her dad. She clasped the front tail of his shirt with her hand. He batted her hand away and said “I will see you in 3 hours. Be happy.”

I scrambled for my phone - to drop a pin on a GPS so I could report the location, or to take a photo of the moto plate…but my 5% charge from the restaurant earlier had once again died.

And our light turned green. Mr. Sokah went one way, and the moto went the other, with the little girl in the blue pajamas sitting on the back. She looked back at her dad, who was already walking up the driveway to the house, and then she looked back at me.

I will never forget her face in that moment for as long as I live.

As is the theme of my life in Cambodia (over the good moments and the bad), I wept the entire way home. I wept because felt so helpless. The very thing I have come here to fight happened right before my eyes and I was completely frozen in shock for the brief seconds it played out. I wept because I felt guilty that I should have gotten out of the tuktuk and grabbed her myself - no matter what danger I could have found myself in. I wept because I felt dirty for what I knew was happening in those next 3 hours. But mostly, I wept my heart is broken. It is broken by the darkness of sin in this world. Broken by a man who thinks little girls are just things you can buy for your own pleasure. Broken by a father who sees his precious little daughter in her new, clean pajamas - not as a gift to be loved, but as a product to turn a profit. Broken by this moment I saw of a life of a little girl whose childhood is gone, whose life is not valued, and whose own family has put her there.

I believe that God is sovereign. I believe that there are no accidents in this world - that we have a God who ordains and works in even the “accidents,” like today’s frustrating tuktuk miscommunication, to happen for a reason. And sometimes it may be for a reason I will never know this side of Heaven.

But because of the accidental miscommunication, I was there on that street tonight. And I saw a father sell his little girl to another man. And I looked into the eyes of that little girl and I am haunted by them. I hope that they will haunt me forever.

In my tears I asked God why this had to happen, and why I had to see it. And though I didn’t hear God’s voice answer me directly, He did bring something to my mind: Maybe I am the only person in the world who knows this part of this little girl’s story and also believes that there is hope for her in the Gospel of Jesus Christ. Maybe I am the only Christian who has ever looked into her eyes. If I really believe that God is sovereign, then I have to believe that God’s timing (which is always perfect) was at work in the terrible tuktuk miscommunication and road closures that led me to being on THAT street in THAT moment to see THAT sad event. Maybe God had me there “for such a time as this” so that one of His people, someone, anyone, would be heartbroken enough to pray for this little girl.

But why should it only be me who prays? Perhaps God had me there to see this moment so that YOU can pray as well.

So friends, could you do me a favor? Take a moment right now to pray for the little girl in the blue pajamas. Pray for her safety and for her heart to be protected. Pray that she will not let the hurt, the abuse, and the abandonment that she must feel right now to become jaded or feel worthless. Pray that God will save her from this story that she has been forced into. Pray that she will come to know Jesus Christ. Pray that she will be saved from this situation and that one day she will be able to believe that there is a Father who will never leave or forsake her, who loves her as his precious child and not only would he never sell her, but He would give his own LIFE to purchase her own.

I have no idea what these moments are like for her right now, but what if she could know that even in the darkest and worst moments she had hundreds of people on the other side of the world who were pleading with God for her safety, her freedom, and her salvation?

And there are thousands of other little girls just like her around the world who need the same prayers.

But here’s the REALLY tough one to pray: Pray for the man on the moto. And pray for the father of the little girl. Pray that God will wreck their world, be it with the arm of justice or the arms of Christ. Those two men need the very same Gospel that you and I need every day. If we believe that the Bible is true, then we must believe that there is no sin too great or too dark that the blood of Jesus Christ cannot cover.

What a story of rescue that would be! A little girl, a pedophile, and a greedy, coldhearted father- all set free from their bondage and ushered into the Kingdom of God!

He is the God who saves. He brings light into darkness and freedom to prisoners. Will you join me in asking Him to do just that, this very moment?

Learn more about the Cambodia Freedom Project and other mercy and justice ministry work in Cambodia at www.plantingcambodia.com.